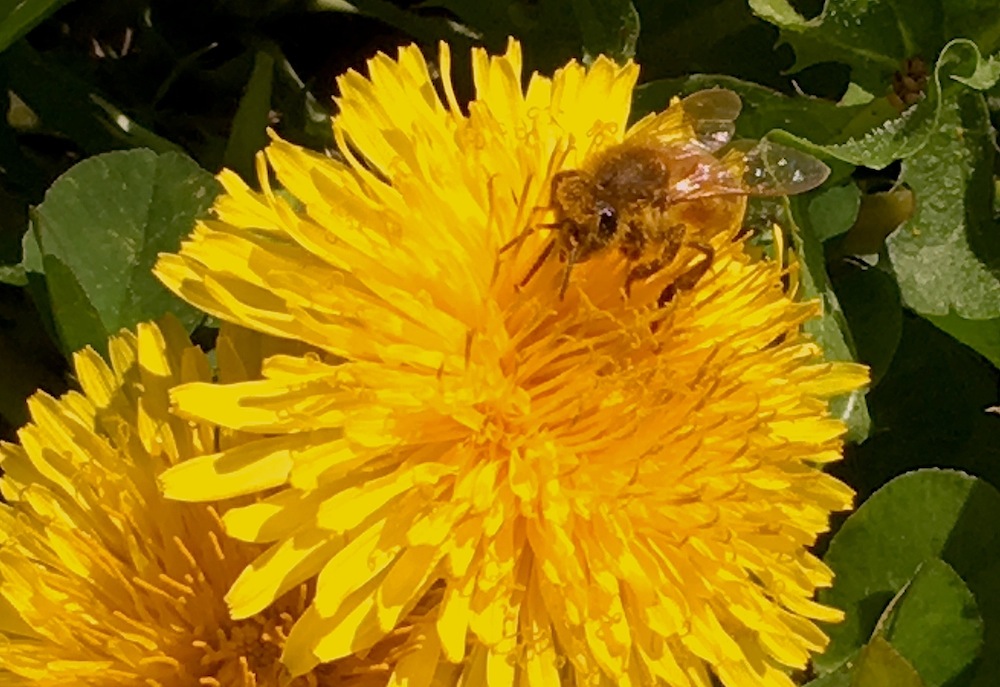 As darkness gave way to light Tuesday morning, the sky revealed an ancient luminary that I had begun to wonder whether I would ever see again.

A couple hours later as I sat in a chair looking into the backyard I noticed something I couldn’t take my eyes off: bees. More precisely, Steph’s two new colonies of honey bees. They seemed as exuberant as I felt when I awoke a little earlier in the morning. In the dappled sunlight streaming through the giant pin oak the bees were flying and working and singing.

The bees arrived in their cages on April 22, a bright sunny day in its own right. Into the hives each colony and their queen went, and for the next four days, the weather cooperated and we watched them come and go. We wondered, with great interest, if inside the each hive the bees had eaten through the candy plug and released their queen from the small cage that holds her until they get acclimated to her pheromones and hopefully accept her. If they didn’t she might be dead; if they did, she could also have met her demise. Colonies usually accept their queen. Usually but not always.

We were a day away from opening the hives to check on each colony’s queen, when the spring-time weather turned, well, to spring-time weather. For the next six days it rained and blew and the temperature dipped and dropped and dipped some more — miserable weather for people, even worse for newly released bees in need of acclimating themselves to their surroundings and building a vibrant colony.

When you’re a worker bee, it’s tough to do your job of collecting pollen and nectar when it’s cold, wet and windy out. When you’re a human, at least you can turn up the furnace or put on a raincoat.

So when the inclement weather finally relented and Steph could finally get in and check the hives, we were relieved to see evidence that both queens are alive and seemingly doing well. It’s too early in the process to see if the queens are hard working and if they expect as much from their colonies of thousands of worker bees. But at least the sun is out, the queens are on their thrones and, for now, all is right in the backyard.

May the flying, working, singing and dancing continue throughout the spring and summer.