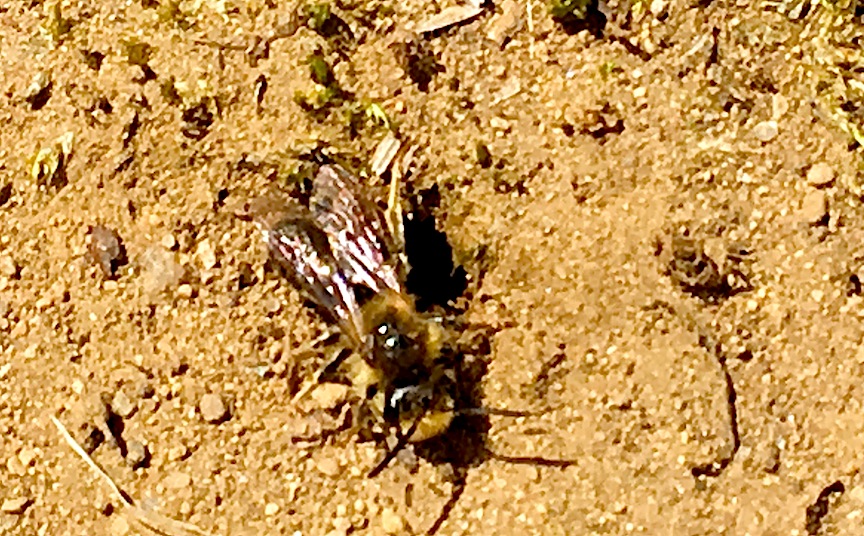 WAYLAND, MASS. – While I wandered the trail through the woods with my eyes scanning the canopy above for the sound and flutter of songbirds, other members of our small party were bent forward at their waists, their attentions drawn to the ground below where a different sort of winged creature moved about.

This was a little more than a week ago during a picnic and birding outing with some of Stephanie’s extended family at Great Meadows Wildlife Refuge west of Boston. Having been welcomed to the woods by a large flock of migrating palm warblers and numerous tufted titmice, I was preoccupied at the time, scouring the surrounding trees for blue-gray gnatcatchers, which a local birder at the trailhead had told us to keep an eye out for.

As I caught up with the others, however, I, too, soon found myself focused on what was happening on the ground near the trail. It was there that I noticed scores of little holes in the ground, many of which had mounds around them similar to small anthills, only larger, and coming and going — by ground and by air — were dozens of well-camouflaged bees.

I was instantly captivated.

Soon the group of relatives moved on and I reached for my phone with the hope of getting a photo or two to use for identification purposes later on, since not anyone in the small party knew what kind of bees these were that we had enjoyed watching. The photos, as you can see from the one accompanying the story, didn’t turn out well as the bees had seemingly more important things to do than to pause and have their pictures taken.

I’m not entirely unfamiliar with bees – Stephanie has tended honey bee colonies in our backyard and elsewhere for the past five years; bumble bees always gain my attention whenever they’re in the garden; and we’ve attracted mason bees to some manmade bee hotels we’ve made and added to our landscape – but for the most part I’ve have had little experience with them, save for the aforementioned species.

Unless you’re really into bees and other insects, that’s probably not unusual. Most of the some 3,600 native bee species in the United States, including about 300 species in Iowa, are small and solitary creatures that fly under most of our radars. While non-native honey bees live in large colonies of tens of thousands of bees, bumble bees and some sweat bees are a few of the only other bee species that form social colonies. To see and learn about most bees, you have to work at it.

That said, here’s what I discovered about the bees in question. It turns out they were a species of mining bees, also commonly known as andrenid bees or digger bees, which build burrows and nest in the ground. Mining bees, which are found in Iowa, range in size from that of a honey bee to much smaller and are known to be docile and rarely sting people. They are typically darker in color than honey bees, can have stripes and a few are even a metallic green color.

Female mining bees dig their own individual burrows that typically contain a vertical tunnel with smaller side tunnels that end in a single cell. Each female then works to gather pollen and nectar for the offspring. If soil conditions are suitable, many bees may nest near one another.

If you keep your eyes on the ground this spring and summer, you might cross paths with a few mining bees. You might just come to dig them, too.