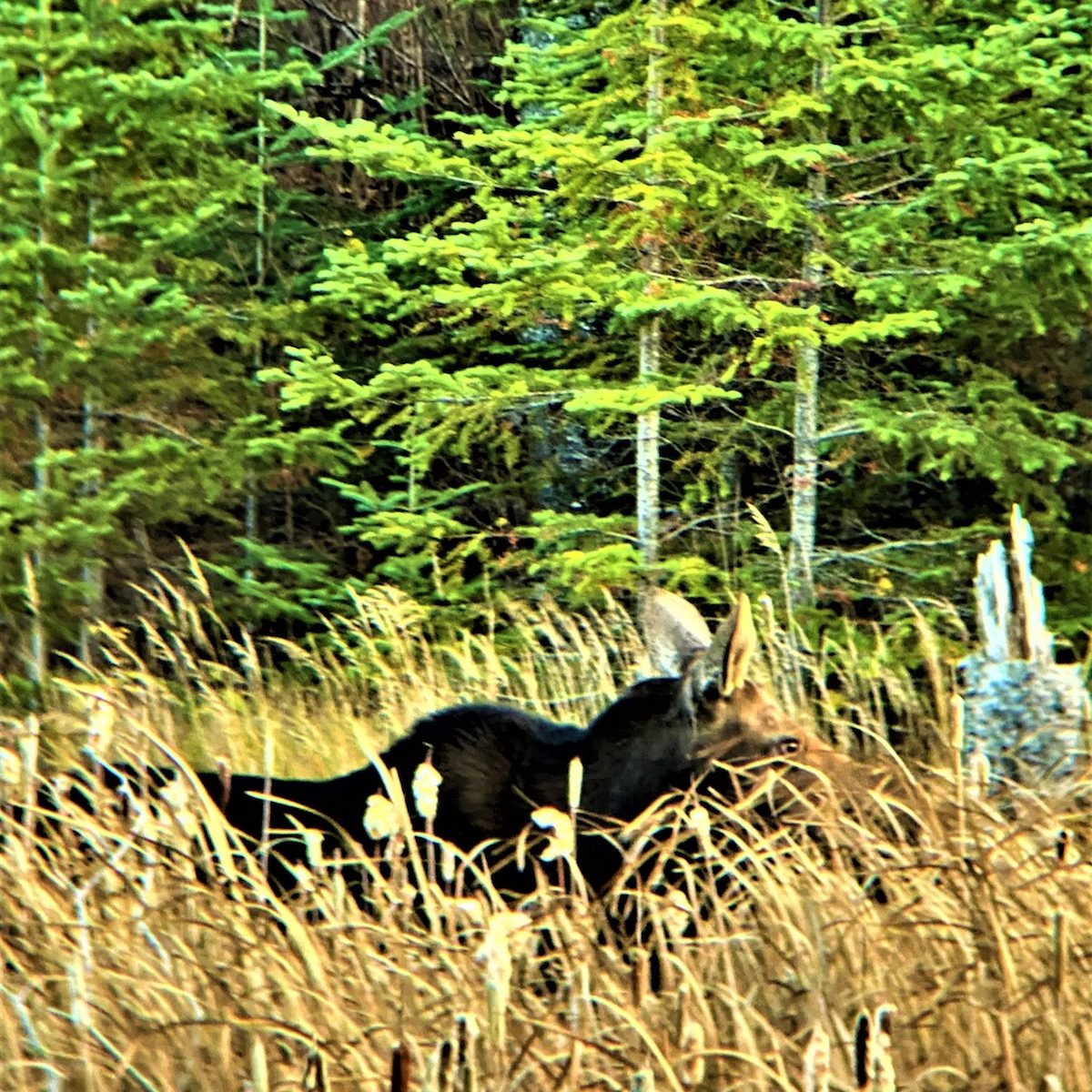 GRAND MARAIS, Minn. – Rounding a blind corner my foot reactively moved from the accelerator to the brake. Ahead, just a few hundred feet, two vehicles were pulled over on the shoulder of the paved road. On northeastern Minnesota’s Gunflint Trail, like national parks and other wilderness areas frequented by tourists, parked vehicles with people standing beside or hanging out of windows with cameras, cell phones or binoculars in hand usually means one thing: an animal of interest has drawn the attention of passersby.

In this case, a large, brown mass barely moving in the middle of a bog some 200 feet or so from the edge of the road had the rapt attention of three individuals. I eased in behind a Subaru with a young woman sitting on the panel of the driver’s side door, window down and cell phone recording the activity.

Simultaneously the three of us in the vehicle shouted, “Moose!”

Sure enough, there in the distance was a large, healthy-looking cow moose browsing on aquatic plants. Cattails and rushes obscured the lower half of her body, and every minute or so her head would also disappear. Several seconds would pass before she would lift it up into view again, water pouring out of a mouth stuffed full of green vegetation.

I pulled out my binoculars and climbed out of the truck as Stephanie and Elizabeth hurried to find their cell phones before starting to take photos and videos of the cow, which showed no interest in her growing audience. Soon three more vehicles joined us on the side of the road, while a fourth and a fifth stopped in the middle of the oncoming lane to take a peek.  Fortunately, on this scenic and historic byway in the Superior National Forest, most of the locals appear to anticipate and perhaps even expect such spontaneous roadside gatherings. Here, encounters with wildlife are an everyday way of life.

In fact, this was our second stop to observe the local fauna. Thirty minutes and several miles prior, we had stopped to watch a red fox that had plopped down in the middle of the road. The curious canine’s nonchalant behavior seemed to communicate it was unconcerned for its safety. We enjoyed the closeup encounter, and Elizabeth took several photos before resuming our drive, leaving behind the handsome fox and hoping it would safely make its way back into the woods where the threat of human vehicles would be quickly replaced by the ever-present danger of a potential encounter with a local wolf pack.

Back at the bog, I struck up a conversation with the woman who had been the first to see the moose and pull over. She’d seen another cow at the edge of the same bog when she first rounded the corner, but when she pulled over, it had quietly slipped into the nearby woods and vanished. It was a moment later that she saw the other cow grazing in the center of the bog. For someone who had grown up in northern Minnesota and had spent many a weekend in recent years driving the Gunflint Trail with the unfulfilled hope of seeing North America’s largest member of the deer family, seeing two moose in the span of minutes was an experience to savor.

Stephanie and I, too, savored the time watching the cow, reminiscing as we did about our first time up the Gunflint Trail some 25 years ago. It was on that memorable occasion that we had first watched a bull moose feed in a small roadside pond. Later that morning, we saw a cow moose trot through a meadow. A few autumns later, we stopped near sunset at another pond on the Gunflint Trail and joined several other travelers who were mesmerized by a bull and cow moose cavorting near the edge of a stand of red and orange maples set ablaze by the day’s final shafts of sunlight. To our astonishment, with darkness quickly descending, the cow suddenly began running up the bank toward us with the bull charging behind her. Our last contact with them was hearing their hooves clicking on the blacktop road only a few yards away before descending the other bank and crashing into the now black forest.

There would be no such dramatic exit by the moose on this day. The cow, finally having gotten her fill of supper, slowly stepped out of the bog and in a few strides was gone from our view, slipping into the woods and leaving us with a few inferior photos and videos but also vivid memories to add to a treasure-trove of previous wildlife encounters.