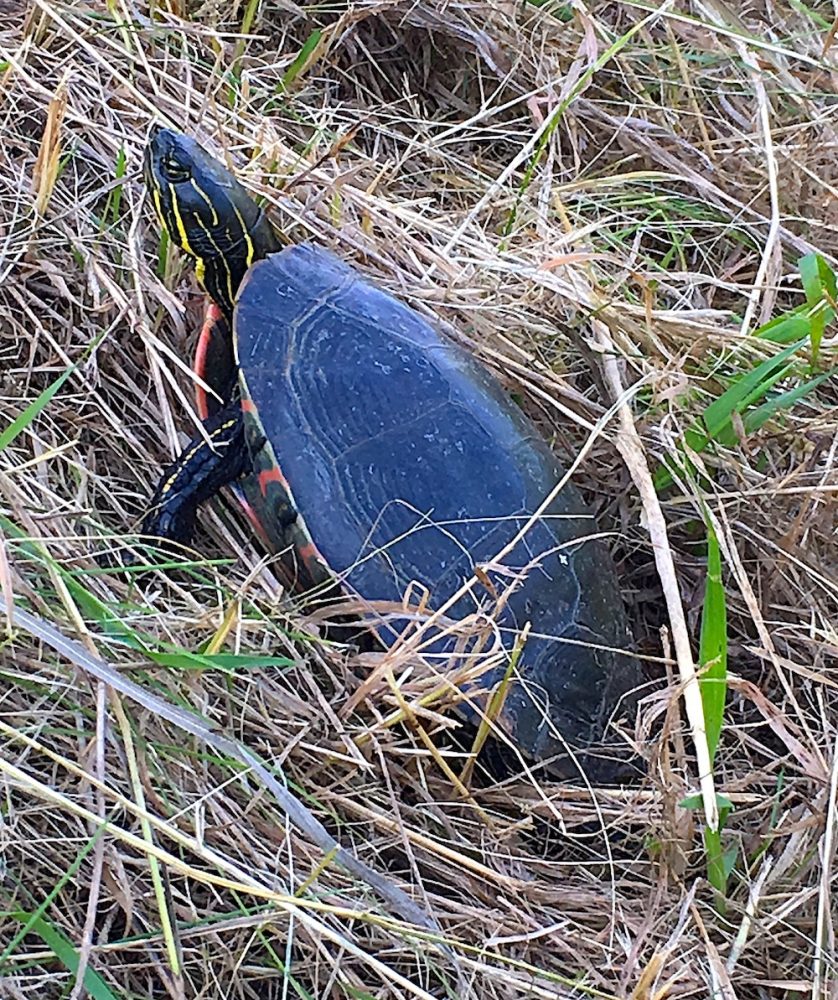 A female Northern painted turtle lays eggs in a mound of sand and dirt near Fall Lake in northeastern Minnesota. Photo by Stephanie Burras

ELY, MINN. — If spring is a time in the natural world for new birth, then summer is the season for those vulnerable young creatures to hurry and grow as fast as they can before migration beckons or winter arrives. If you’re a fledgling or a fawn, it’s a time to hurry.

Not so if you are a turtle.

Turtles are a bit of an anomaly in the wild kingdom. Unlike many of the bird and mammal species that live around them, turtles wait until early summer to ramp up the reproduction process. It’s this time of year that female turtles crawl out of the ooze of their wetland homes and climb to higher, drier ground in search of suitable soil conditions in which to lay their eggs.

In our corner of the world, one of those apparent prime areas for creating nests in which to deposit fragile eggs happens to be our driveway. Right where we like to park. And turn around. Turtles, it seems, are not averse to taking one’s parking spot or holding up traffic when it comes to the urgency of reproduction.

This is our fifth summer at the cabin we are happy to spend time at above a bog in the Superior National Forest. It’s also the fifth summer we’ve seen female Northern painted turtles show up in the first week of July looking for spots in the hardscrabble of the gravel driveway in which to lay their eggs.

Northern painted turtles are those gentle blackish-olive-green, red and yellow turtles the size of large pancakes that surely everyone has seen in person, if not close enough to touch then at least a lineup of them sunning themselves on a log in a pond.

In our neighborhood, painted turtles seem to be over or around nearly every hill or corner. In the past week, I’ve abruptly pulled over on a busy highway twice, hurriedly run into the center of the road and snatched up a turtle and delivered its flailing body to the other side — in the direction it was going — in order to potentially spare its life.

Others haven’t been so lucky. I’ve seen five turtle fatalities along the road in the past week. At our cabin in recent years, I’ve also observed several disturbed turtle nests — I suspect ravens and foxes — and have yet to see empirical evidence of successfully hatched offspring in the form of baby turtles.

Still, each summer, one or two female painted turtles haul their carapaces up the steep hill from the bog to our driveway to dig shallow holes in the dry and rocky soil. Perhaps intuitively, they lay lots of eggs, coming back several days in a row and digging separate nests for their future offspring. It’s a safeguard to ensure the propagation and continuation of the species.

Summer is a time for turtles. If you see one crossing the road, be sure to give it a brake — or a helping hand.