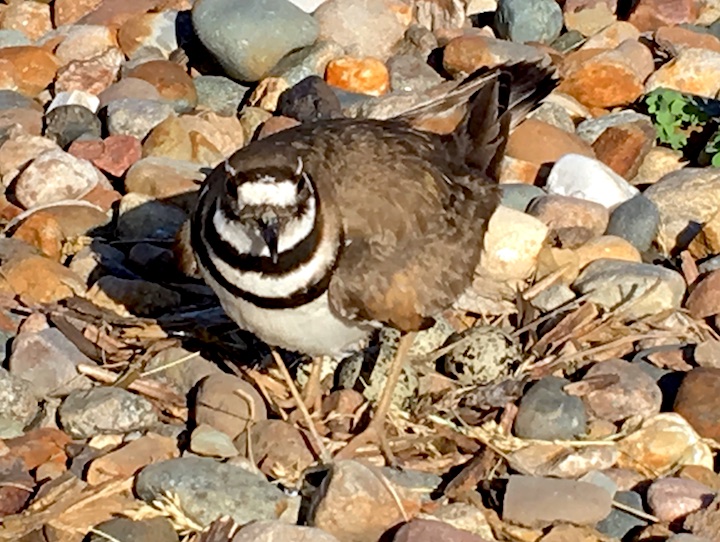 Dad, what’s wrong with that bird?

That was the question posed by our daughter, Elizabeth, as we walked down the sidewalk toward the car following church.

The bird in question was flopping about on the stone-covered walkway like a mortally injured gamebird shortly before gasping its final breath. With wings akimbo, the brown-and-white-colored bird with black neck bands indeed looked as if it was on its last leg, literally and figuratively.

It quickly struck me, however, as I looked up from the bird to see the concern on Elizabeth’s face that this wasn’t a struggle over pending death but rather a ruse in an effort to preserve life. Or, as the case may be, future lives.

As you may have already deduced from the description of what occurred or from looking at the accompanying photo that the animated bird was a killdeer, and he or she was simply doing what any killdeer parent does when it or its young are confronted with danger: feigning injury. Like some other species, killdeer will perform a broken-wing impression in an effort to draw attention away from its nest of eggs or its young. In our case, the killdeer was trying to divert our attention away from its nest — a simple depression in the rocks — and its contents: four tan eggs with dark markings.

It’s easy to be both impressed and amused by the antics of killdeer. They ardently utilize both vocal and theatrical expression to draw the attention of people or potential predators to themselves and then lead them on a wild chase away from their nest or offspring. Once they sense they have created a safe distance between the intruder and whatever they are protecting, the adult killdeer miraculously recovers from its “injury” and flies even further away, often with the predator in pursuit.

Killdeer are upland shorebirds that tend not to spend time at the shore. Rather, they prefer gravel roadways, mudflats, railroad edges and open fields where they feast on insects and occasionally snails, crayfish and worms. Killdeer are most closely related to plovers and spend the spring, summer and fall throughout all of the upper Midwest before migrating to southern states and Central America for winter.

The next time you see a boisterous bird dragging its wing and frantically calling “kill-deer, kill-deer,” don’t take the bait. Instead, carefully look around for a nest of well-camouflaged eggs or, if you’re fortunate, a small clutch of fledglings that look like stilted dandelions going to seed. Either way, you’ll be happy to have made the discovery.