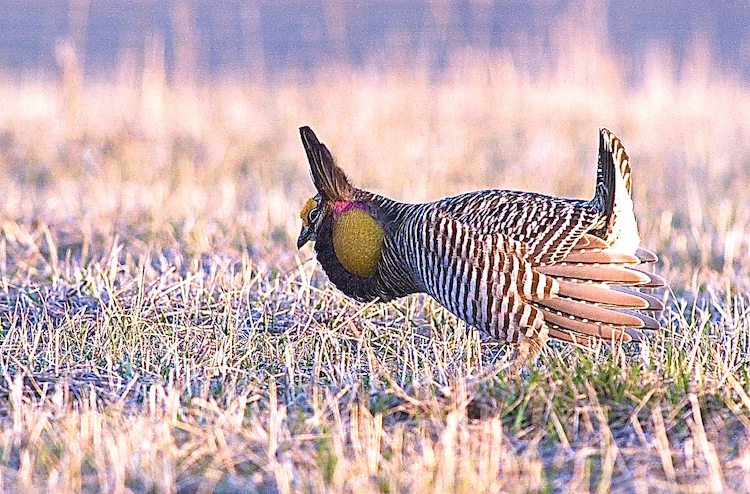 A male greater prairie chicken raises the feather tufts on his head fans his tail feathers and inflates the air sacs on the side of his throat as he begins calling for a mate. The deep booming sound he makes along with the staccato stomping of his feet is all part of the mating ritual male prairie chickens perform on booming grounds each spring kicking off mating season. Photo by Ed Rood

It’s booming time on the short-grass prairie of southern Iowa.
For prairie chickens that is.
The public is invited to the 15th-annual Prairie Chicken Day on Saturday, April 7, at the Kellerton Bird Conservation Area in Ringgold County. Prairie chicken viewing will take place from dawn until the chickens leave the booming grounds sometime around sunset. The viewing platform is located two miles west of Kellerton on Iowa Highway 2 and 1 mile south on 300th Avenue.
Prairie chickens begin their annual ritual around mid-March and continue through April. Male prairie chickens meet at the booming grounds, or leks, every morning to display, spar and fight with other males in their attempt to lure female partners.
Stephanie Shepherd, of the Iowa Department of Natural Resources, said there are “typically 20 to 40 birds that use the lek at Kellerton and they will display each morning regardless of the weather.”
A commercial spotting scope and a limited number of binoculars will be available for use, but it is recommended that guests bring their own binoculars or spotting scope if possible as the birds will be about 200 yards away. Other events and activities will follow at 9:30 a.m.
The Kellerton Wildlife Management Area was dedicated as Iowa’s first Bird Conservation Area in 1999 when it simultaneously became the first grassland Bird Conservation Area in the country.

Leopold: ‘Roots of the Land Ethic.’ Speaking of “booming” or “boomers,” as the case may be, Story County Conservation invites the public to the monthly O.W.L.S. (Older, Wiser, Livelier Seniors) program at noon Tuesday, April 3, at the Story County Conservation Center at McFarland Park. O.W.L.S. programs are designed for “baby boomers” or older but anyone can attend.
Steve Brower will present “Aldo Leopold: Roots of the Land Ethic,” a program featuring photos and quotes from Leopold’s childhood and early career that show the influence of his youthful discoveries.
Lunch follows Brower’s program and is available for a fee of $7.50. Call (515) 232-2516 to register.

Iowa gets a check from the USFWS. Earlier this week the U.S. Department of the Interior announced $1.1 billion in annual national funding for state wildlife agencies from revenues generated by the Pittman-Robertson Wildlife Restoration and Dingell-Johnson Sport Fish Restoration (PRDJ) acts.
Iowa’s portion of the funds totaled $16,028,308, which is earmarked to support critical state conservation and outdoor recreation projects, including
$4,513,130 in Sport Fish Restoration funds and $11,515,178 in Wildlife Restoration funds.
The Pittman-Robertson and Dingell-Johnson Acts created an excise tax paid by the hunting, shooting, boating and angling industries on firearms, bows and ammunition and sport fishing tackle, some boat engines, and small engine fuel. The funds are then allocated by the U.S. Fish and Wildlife Service.
For more information, visit www.wsfrprograms.fws.gov.

Stocking starts on trout streams. Local anglers who’ve gotten hooked on trout fishing as part of the DNR’s local urban trout stocking program might be interested in taking a trip to northeast Iowa soon.
Stocking on dozens of the state’s cold-water trout streams begins April 2, and by April 7 every stocked stream will have received at least one stocking of 10- to 12-inch trout. Iowa’s three trout hatcheries produce and stock about 310,000 catchable-sized rainbow or brook trout and 110,000 fingerling brown trout into hundreds of miles of northeast Iowa streams April through October.
Funding to support the stocking program comes from the sale of fishing licenses and trout fees. Anglers must have a valid fishing license and pay the trout fee to fish for or possess trout. The number of trout stamp fees has steadily grown in recent years, due in large part to the urban stocking program, such as the one that occurs twice a year at Ada Hayden Heritage Park Lake in Ames.
Last year, 43,324 Iowans and 5,336 nonresidents fished for trout. The daily limit is five trout per licensed angler with a possession limit of 10.
Google “Iowa DNR trout streams map” for detailed information on where to fish.

Insect investigators. There are times when I wish our two children were younger, or, egads, older with children of their own, so I could participate in some of the fun nature tot programs offered by Story County Conservation naturalists.
One of those events will be from 10 a.m. to noon Saturday, April 21, at McFarland Park when kids age 5 and older get to explore the world of insects by investigating the park’s pond, woods and prairie.
There’s no cost to participate, but registration is required by 4 p.m. Wednesday, April 18, by calling (515) 232-2516. Participants also are required to wear long pants and closed-toe shoes and should expect to get wet, dirty and muddy. Now how fun is that?!